ROYAL BUFFALO HUNT: THE BACK STORY

Geopolitics and the Wayward Son 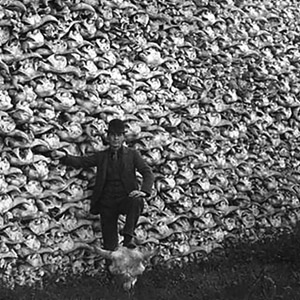 In the North America of the 1830s, it's been conservatively estimately that there were 30 million wild bison roaming the Great Plains from Mexico to Canada. By 1890, there were less than 500 and many of those were in small captive herds. The vast herds of free roaming bison were no more. All that remained were the countless bleaching bones scattered across the landscap, bone that struggling settlers collected by the handcart-load to supplement their meager income, selling them to jobbers to be shipped to Detroit. There they were ground up for fertilizer and powder to bleach cane sugar white.

At the apex of that great die-off, the United States government helped organize bison hunts on the eroded grasslands between the Red Willow and Medicine Creeks, south of the Platte River in Nebraska. It wasn't the first such sanctioned hunt during the Grant Presidency. There had been others, but this particular event had geopolitical undertones because it involved an empire whose continent-spanning possessions, as late as 1867, included Alaska. That imperial power was, of course, Russia.

In the early 1870s, the balance of power in Europe was shifting with a now-united Germany in ascendency, having just defeated the France of Napoleon the Third in the Franco-Prussian war. A wary Russian crown was hoping to smooth over recent tensions caused by their troublesome Ambassador to Washington, and to avoid yet another familial scandal involving one of their Grand Dukes and a pregnant commoner. So the emperor, Tsar Alexander II, decided to send his 21 year old son, Alexei, to America... and into the very heart of a brutal, blood-soaked struggle between cultures.

The story of what became known as the Great Royal Buffalo Hunt is one of those rare, but true convergences of personalities and politics that would shape the world we in which we live today. It brought together "wild west" icons: William F. "Buffalo Bill" Cody and George Armstrong Custer, both of whom would in time achieve a type of immorality, one as a internationally-known showman, the other in one of America's greatest military defeats of the 19th century. Their assignment from General Phil Sheridan that January of 1872 was to guide and protect the young Russian nobleman on a three-day bison hunt, accompanied by numerous Lakota (Sioux) warriors, led by Spotted Tail (Sinte Galeska).

The New York Herald had a reporter on hand to send - by horseback and telegraph - dispatches from the field, which have been preserved for posterity by the U.S. Library of Congress. Those colorful newspaper articles can be found under Resources | Historic Docs.