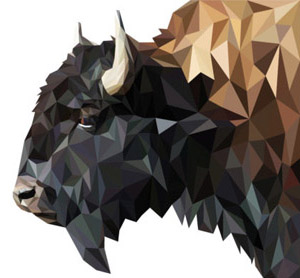 For untold millennia before their numbers were nearly pushed to extinction, bison -- also called buffalo -- roamed most of the North American continent from Mexico to Canada, the Tidewater to the Rockies and beyond. Now through the magic of augmented reality, they will soon do so again. Our proposed Little Big Buffalo Roundup mobile geolocation game will marry GPS and augmented reality with the rapidly emerging cryptocurrency marketplace to make capturing and raising your own digital bison herd challenging and fun, but also potentially rewarding.

All it will take to hunt the virtual herds of Little Big Buffalo Roundup is a modern smart phone, the App, and the perservance to capture animals that are elusive, strong, and fast as a horse, but unlike a horse, they have horns! (See development mockup).

The game is at the conceptual stage of development, but has attracted the attention of a respected leader in the the cryptocurrency world who also happens to own a herd of bison and has experience in game development.

If you're interested in following the progress of the game as it develops, complete the form below and we'll put you on the notification email list. You can also download the Game White Paper that goes into more detail on its mechanics and cryptocurrency elements.