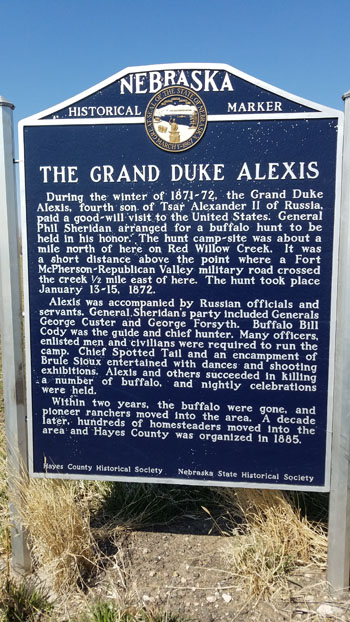 Established on the site of the earlier Camp Cottonwood, Fort McPherson began its 14 year service life in 1866. Located 10 miles east of the then-village of North Platte, it became the home of not only various US Cavalry and infantry units, but also the base from which one William F. Cody worked as an Army scout. It was from this timbered outpost that not only were punitive military expeditions launched largely against the Sioux, but also from which the occasional bison hunts were organized for wealthy American and European elites. One of those hunts would gain notoriety as the "Last Great Buffalo Hunt" or more famously as "The Great Royal Buffalo Hunt."

After being fully vaccinated and quarantined for the prescribed length of time, this author and pilot Dave Ott flew to North Platte by Beechcraft A36 Bonanza to meet up with Lincoln-based drone pilot Mark Dahmke. Together we caravanned south some 70+ miles into Hayes County to the John Mintling Ranch, north and east of Hayes Center. It was here in the rugged ravines between the Platte and Republican Rivers the US 2nd Cavalry Regiment erected the temporary hunting camp in early Janaury 1872 that would provide a base of operations for hunters, including Russian nobility and hundreds of Lakota warriors.

Guided by a 2008-2009 archaeological survey conducted by the University of Nebraska Department of Anthropology, our mission was to photograph, both from the ground and in the air, the location of the original campsite at the tip of conical limb on the banks of Red Willow Creek. Here are some of the photos from that expedition, which also included a visit to Ft. McPherson National Cemetery, where hundreds of US soldiers, many marked as "Unknown" are buried after the closure of most of the frontier forts with the cessation of the "Indian troubles."